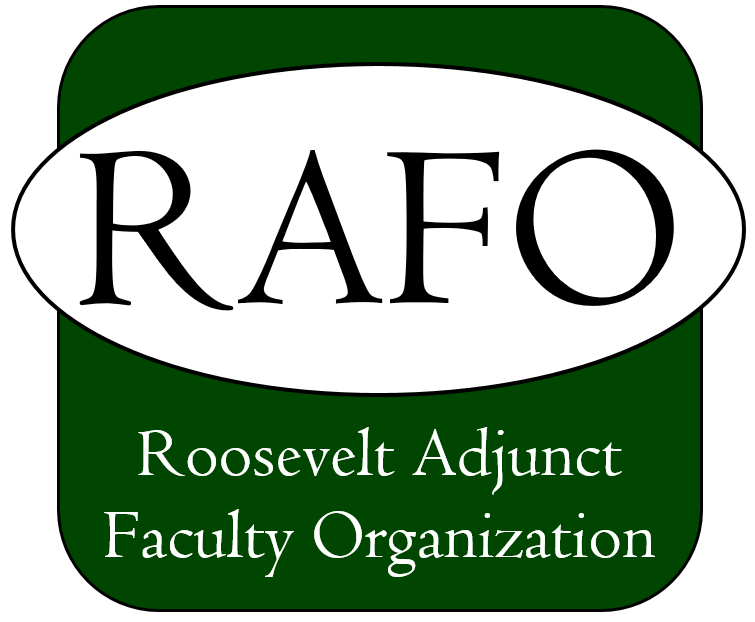 I was honored to serve as the lone RAFO delegate to the Illinois Education Association Representative Assembly held in Chicago from March 30th through April 1st. First, a shoutout to my friend and RAFO colleague Bonnie Smothers. Bonnie actually received more membership votes than I did to serve as delegate, but she was unable to attend and I had the opportunity to serve as her successor.

The 3-day Assembly was energized with almost 1,000 educators, support staff, and retired IEA members statewide. During the first morning of the Conference, we were starkly reminded by the IEA staff attorney and by the IEA staff lobbyist of the existential threats that we as educators face, both from Springfield and from Washington. Higher Ed in particular is under attack, as potential legislation and court decisions threaten our right to organize for the purpose of collective bargaining. Fortunately for RAFO members, our own Beverly Stewart, one of my mentors and a tireless advocate for Higher Ed, is the head of the Higher Education section of the IEA. The Higher Ed section (about 40-45 of us) had a productive and inspiring working lunch session, in which Beverly outlined some of the ways in which we can become more active, involved, and vocal advocates on political issues relating to Higher Ed.

Some of the Conference was devoted to administrative issues, like the election of directors, and of new officers, including President. IEA's president-elect, Kathy Griffin, like her predecessor Cinda Klickna, is a true and loyal friend of and advocate for issues unique to Higher Ed. She has often "rolled up her sleeves" and marched alongside Higher Ed advocates, and we know that she will "have our backs" during her term as President.

The administrative issue voted on at the Conference that will have the most direct impact on us, is the difficult decision to raise membership dues $5 per year this coming fiscal year, and an additional $10 the following year. There was spirited and emotional debate on this budgetary issue, which also included substantial staff and other administrative cuts. In the end, the majority of delegates agreed that the increases were necessary to fund advocacy campaigns, and to fund the pension system. With the financial interests of adjuncts at heart, Beverly proposed several successfully-passed resolutions that directed the IEA Board to consider a "tiered" dues structure based upon income, which would provide relief to our many contingent faculty members who may only teach 1-2 classes per year at Roosevelt (if that), for whom the burden of union dues hits the hardest.

It is crucial that we RAFO members have unconditional support from our "parent" organization. I came away from the Conference confident that we do. In my own mind, and I hope in yours, we are getting a very tangible "bang for our buck" by the dues we pay to the IEA. We urge you become more active with RAFO.

Update from the Presidents' Meeting 4/5/17

As this tumultuous school year winds down, RAFO held its regular semester meeting with President Malekzadeh and Provost Becker. Using the questions that RAFO members submitted (thank you!), we received updates on what can properly be called the restructuring of Roosevelt in the wake of its budget crisis and the various pressures RU (along with most other universities) faces in the coming years. This is what RAFO knows as of this moment:

All of this is in RAFO’s minds as we begin negotiations on a new contract this summer. RAFO was (and remains) willing to extend the current contract for a year, but the administration insisted that any changes to the contract be negotiated with the full contract in mind. RAFO has been ready to negotiate, so we will head to the table and keep you up to date on the progress. In exchange, we continue to ask that you communicate with us so we are clear as to what you want this contract to represent for you and your work at Roosevelt.

For those of you who wish to keep track of all developments, RAFO recommends you read the daily Broadcast. Additionally, all Senate meetings (and many other governance meetings such as AAUP) are accessible via the Zoom web app and program, available to all adjuncts. Finally, opportunities exist to  work with RAFO to stay updated and contribute as the changes ensue. (There will be more on that final point in future communications.)

If you have a class, good luck with the rest of your semester. If you wish to have a class this fall, tell your department chair NOW so you are included in their planning. As always, stay in touch with RAFO. This will be a working summer.

Joseph Fedorko and the Officers of RAFO, IEA/NEA

The Executive Committee invites you to join us for our Spring Membership Meeting, on Thursday, April 6, from 4 - 6 pm in room 825 of the Auditorium Theatre building. We will discuss Roosevelt's restructuring, its impact on adjuncts in the 2017-18 school year, and our upcoming contract negotiations. Light refreshments will be served. We want to hear from you and can use your help - find out how on April 6.

The Executive Committee of RAFO

Lion of the Senate: When Ted Kennedy Rallied the Democrats in a GOP Congress
Nick Littlefield and David Nexon (New York: Simon & Schuster, 2015)

Reviewed by: B. J. Smothers

History never exactly repeats itself. There’s always a little wrinkle that makes the difference. In 1994, when Newt Gingrich rose to power, he marked his territory by orchestrating the Contract with America, threatening to eviscerate New Deal and Great Society legislation. Six weeks before the 1994 election, he gathered Republicans on the steps of the Capitol (as Reagan had done to celebrate passage of the Reagan tax cut) to introduce Gingrich, Dick Armey, and political adviser Frank Luntz’s Contract with America and to launch the next assault on progressivism. In the subsequent GOP rout, after forty years of being in the minority, Republicans had flipped that position in the House, 228–207, and in the Senate, 52–48. To make matters even worse, two senators and several House Democrats defected to the Republican Party after the election. Democrats were stunned, deflated, and President Clinton was promising to work with a Newt Gingrich controlled Congress. But then, there was the indomitable Ted Kennedy to act as a shield between U.S. citizens in need and the powerful. The means by which this contest played out is detailed in Lion of the Senate.

The Chronicle of Higher Education is now available from the library with any roosevelt.edu account at Chronicle.com. Any user who creates an account with their @roosevelt.edu e-mail address will be able to access premium content from any location or device.

If you have already created an account at Chronicle.com with your @roosevelt.edu e-mail address, that account will automatically link to the site license so you will not need to create a new one. Please contact Robin Hofstetter with any questions about creating your account.

As lead negotiator for the 2020-2024 contract, I am pleased to announce that your negotiating team and Roosevelt University have come to an agreement. RAFO is extremely pleased with the final outcome and we believe you will be, too. The University was adamant on 0% for the first year, but as an offset for that 0%, we negotiated a signing bonus of $150 for each bargaining unit member that taught either in Spring 2020 or will teach in the upcoming Fall 2020 semester. That then takes us into the final three years of the contract where adjuncts will receive a 2% increase for each of those years.

As I hope you can see from the above, RAFO worked hard to ensure that you are rewarded for the professionalism and integrity all have shown during these unusual and trying times. We are attaching a copy of the final contract for you to review and eventually ratify. The areas that appear in green are changes that were made to the verbiage in the contract that will support RAFO during the upcoming 4 years.  Appendix A reflects the 2% increase for each step in the final three years.

A link with the time will be sent next week for all to join this a zoom meeting, where we can answer your questions about the contract.

In closing, we hope you will be as excited as we are regarding the new contract.

Don Wlodarski and the RAFO team:

Member of the Illinois Education Association